bfi is proud to announce it is now the exclusive dealer for JOLT Lighting in the New Jersey/New York metropolitan area. JOLT has been in business since 1992 serving the office furniture industry. JOLT is the only US manufacturer focused solely on flexible lighting solutions for desks and workstations.
Learn more...

Finally! An ergonomic lighting solution for under bins or shelves.

Replace two or more conventional under cabinet task lights with one under cabinet Railite, to create a more ergonomic work environment.

Visit one of our dealer showrooms for a demo of these amazingly cool JOLT lights. You absolutely must "see the light" to believe how great they really are! Contact your bfi sales representative or contact us today.

Herman Miller is ranked once again as the "Most Admired" company in its industry in Fortune magazine's annual survey broadly measuring the reputation of America's corporations.

The results, published in Fortune's March 6, 2006, edition, rate Herman Miller as the most admired firm in the furniture industry for the 18th time in the last 20 years. The publication ranked Herman Miller first among all companies in its industry in four of the eight key attributes of reputation -- innovation, employee talent, social responsibility and quality of products/services.

"The Fortune ranking recognizes the lively talent that we have throughout our corporate community, as well as our spirit of innovation and commitment to enduring quality and problem-solving design," said Brian C. Walker, President and CEO of Herman Miller. "We aim to differentiate ourselves from the competition, and it's terrific to see the results of that effort show up so clearly again this year."

The magazine characterizes the annual listing as "the definitive report card on corporate reputations." To compile the Most Admired list, Fortune enlisted the help of Hay Group, which sorted the Fortune 1,000 and the top foreign companies operating in the U.S. into 65 industry lists, each containing the 10 largest companies. Hay then surveyed executives, directors, and analysts, asking them to rate companies in their own industry according to eight criteria: innovation, employee talent, financial soundness, quality of management, use of corporate assets, social responsibility; long-term investment, and quality of products/services. To create the top 20 list, Hay Group asked the 10,000 respondents to the industry survey to select the 10 companies they admired most, regardless of category. These were chosen from a list of the companies that ranked among the top 25% in last year's survey, in addition to those that finished in the top 20% of their industry. A total of 611 companies in 70 industries were surveyed.

Herman Miller helps create great places to work, heal, learn, and live by researching, designing, manufacturing, and distributing innovative interior solutions that support companies, organizations, and individuals all over the world. The company's award-winning products, complemented by furniture-management and strategic consulting services, generated over $1.51 billion in revenue during fiscal 2005. Herman Miller is widely recognized both for its innovative products and business practices. The company trades on the NASDAQ market under the symbol MLHR.
No comments:

Herman Miller to mark the 50th anniversary of the Eames chair and ottoman, collector’s editions will be sold beginning in May. 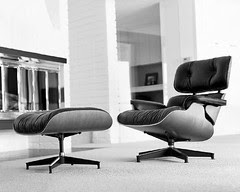 Few items of furniture are as instantly recognizable as the Eames chair and ottoman, perhaps the only chair to make its debut on live television.

Now, 50 years after it was introduced on “The Today Show,” Charles and Ray Eames’ leather-and-rosewood lounge is being reissued in a limited collector’s edition.

For a $6,500 donation at EamesFoundation.org, mid-century modern aficionados can buy the molded plywood chair in Santos Palisander, a sustainable rosewood. Originally, most Eames chairs were made of endangered rosewood Rio Palisander; manufacturer Herman Miller discontinued its use and switched to walnut and cherry.

The new chair set will be available at retail for around $4,000 starting in May.

The Eameses (he died in 1978, she in 1988) were among the most influential architect/designers of the mid-20th century as advocates for the then-unprecedented idea that low-cost, high-quality modern design could be appreciated by the American masses.

The Eames chair immediately found its way into the homes and corner offices of millions of striving Americans and, eventually, the Seattle living room of NBC’s “Frasier” and the permanent collection of the Museum of Modern Art.
No comments:

One of Herman Miller's signature designs -- the Eames Lounge and Ottoman -- is marking its golden anniversary in 2006 with a classic celebration.

"It's a great opportunity to commemorate the enduring appeal of this timeless design and its half-century of continuous production," said Marg Mojzak, Director of Herman Miller for the Home.

The exhibition, entitled The Eames Lounge Chair: An Icon of Modern Design, is organized by the Grand Rapids Art Museum and made possible by Herman Miller, Inc. It features an early production chair and ottoman that was used by Herman Miller's founder D.J. De Pree in his Zeeland, Michigan, home. It also will include an "exploded" 6-foot sculpture of the chair that shows each component of the design suspended -- from its molded plywood and rubber shock mounts to black leather cushions.

The museum exhibition, rare for a single piece of furniture, also will boast a 200-page hardcover book co-published by Merrell Press in London and the Grand Rapids Art Museum. The exhibition catalogue will include both vintage and contemporary photography and tributes to the Eames Lounge and Ottoman from six essayists.

Special media pieces supporting the exhibition include a short original film focused on current production of the chair by Eames Demetrios, the grandson of the Eameses. That segment will complement archival footage of the chair's high-profile introduction in 1956 on the set of NBC studios in New York. On the live program called The Home Show, Arlene Francis interviewed Charles and Ray Eames about their dramatically different approach to lounge seating

The 50th anniversary year is also the occasion for the introduction of a striking and richly grained veneer called Santos Palisander, a sustainably sourced tropical wood from Forest Stewardship Council certified forests.

The original Eames Lounge and Ottoman was produced with a lustrous rosewood veneer on the molded plywood shell, but Herman Miller shifted to cherry and walnut veneers in 1991 due to environmental concerns surrounding the harvesting of certain tropical woods in rainforests.

From January though April, the Santos Palisander version of the chair can be ordered only through the Eames Foundation, based in Southern California. The foundation is a non-profit organization whose mission is to support the creative legacy of Charles and Ray Eames, and to preserve the Case Study House #8 in Pacific Palisades, CA, designed by the Eameses in the late 1940s.

The Eames Foundation edition of the Eames Lounge and Ottoman will be upholstered in an exclusive black leather from Edelman Leather and will be made available for a contribution of $6,500 (with $3,250 tax deductible) to the Foundation. Donors will receive the Santos Palisander edition numbered and marked with a medallion in observance of the 50th anniversary. They also will receive a one-year foundation membership, a DVD of the Eames Demetrios film on the production of the chair, and a copy of the museum exhibition book signed by Eames family members.

"Herman Miller has benefited from its long partnership with Charles and Ray Eames," said Brian Walker, Herman Miller's President and CEO. "It's an honor to make available this special edition of the Eames' best-known design to provide important financial support for the work of the Eames Foundation."

The Santos Palisander veneer will be available at a retail price of $3,995 through Herman Miller for the Home's channel of retailers and e-tailers beginning in May. Throughout the anniversary year, all Eames Lounge chairs -- no matter the veneer -- will be marked with the special medallion. The Eames Lounge and Ottoman also is available through Herman Miller's contract dealers, and they will begin selling the Santos Palisander veneer in May, as well.

"Through the decades, the chair has defined comfort and elegance," said Eames Demetrios, who oversees the Eames Office. "Charles and Ray would be very pleased to see that their handiwork continues to provide so much pleasure for people. And they would celebrate the fact that 50 years later Herman Miller is continuing to invest in the Eames Lounge and Ottoman to preserve the integrity of the original design and safeguard its future."

Herman Miller helps create great places to work, heal, learn, and live by researching, designing, manufacturing, and distributing innovative interior solutions that support companies, organizations, and individuals all over the world. The company's award-winning products, complemented by furniture management and strategic consulting services, generated over $1.51 billion in revenue during fiscal 2005. Herman Miller is widely recognized for both its innovative products and business practices. In fiscal 2004, Herman Miller was named recipient of the prestigious National Design Award for product design from the Smithsonian Institution's Cooper-Hewitt, National Design Museum. In 2005, the company was again included in Business Ethics magazine's "100 Best Corporate Citizens" and was cited by Fortune magazine as the "Most Admired" company in its industry. The company trades on the NASDAQ market under the symbol MLHR.
No comments: