NeoCon East 2015 is being held yesterday and today at the convention center in Philadelphia, PA. Several bfi sales and design employees spent the day to see what's new in the furniture world. We took a few photos from the event. You can see them on our Twitter page or Facebook Page.

8 Ways to Declutter Your Work Desk 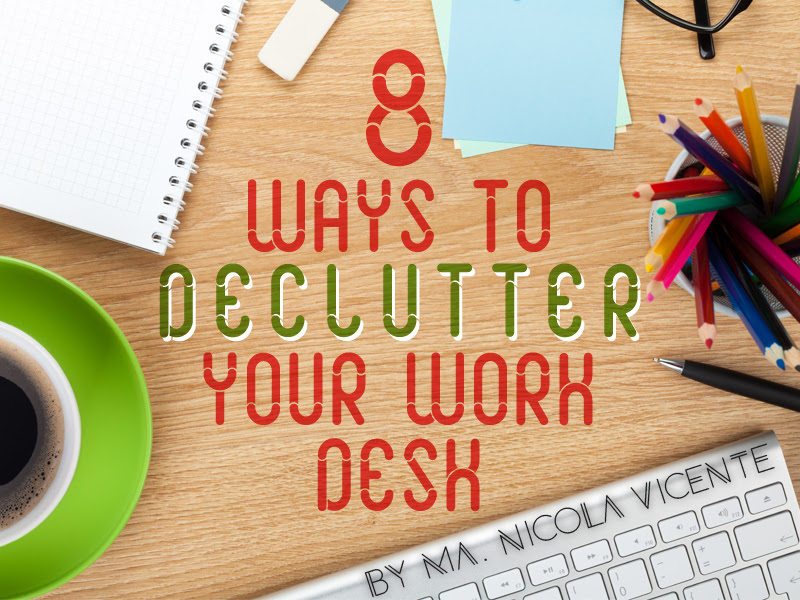 Seeing how most of us spend more time at our office desks then we do in our own homes, it’s surprising that we tend to neglect our work spaces. In the flurry of activity that is your daily work life, it’s easy to forget to take care of your surroundings or to even find time to stay on top of everything.
If the clutter around your desk is distracting you and keeping you from being the creative genius that you are, then here are a few hacks to help you clear up the mess and embrace the productivity.

Via youtube.com
Much like with your closet, the same rule applies: If you haven’t used or touched it in more than two months, you don’t need it. Toss it into the trash bin, and stop dwelling over the guilt. And yes, this also applies to that poor desk plant that’s been dead for the last six months.

Via reddit.com
If you’re one of those people who gets a kick out of going shopping for stationary supplies, this is right up your alley. Treat yourself to desk, pen, and paper organizers. It will give your desk a fresh look and will make it feel like a brand new start.

Via bustle.com
This one is simple: for every new thing that gets added in, take one thing out. If you get a new book, take an old one home. If you hang a new photo or get a new mug, take the other one home. Your office is not a place for hoarding–that’s what your closet at home is for. And no, moving it to a desk drawer doesn’t count.

Via gifbay.com original source: http://bestreviews.com#reviews
Along with streamlining your actual workspace (that is, keeping only what you need at arm’s reach), don’t neglect your computer desktop. How do you expect yourself to function if you have 50 different icons on your default screen? It will only take an hour out of your day to divvy everything up into folders. This will also help you in the long run in terms of naming your files properly, cutting down the time it takes to search for something specific.

Via beamlyus.tumblr.com
There’s nothing quite like the feeling of gratification you get when you cross something off a list. Start your day by checking your mail and reading off the things you didn’t get to finish from the day before. This way, you go about your day calm and collected, and you stay on top of all your tasks. Also, it cuts down on random post-its and reminders to self all over your desk.

Via gifstache.com
If you feel you absolutely need more than 20 things at your workspace at any given moment in time, assign drawers for long term and short term storage. Emergency kits and extra paper can go to the bottom of your cabinet, while stationary supplies, notepads, gadgets, and photos can go at the very top.

Via kidmograph.tumblr.com
There’s nothing wrong with decorating your desk with things that inspire you. Curate your space carefully–approach it like you would if you were managing your very own art gallery. Throw out memorabilia and images that serve no purpose, and keep only the things that inspire you on a daily basis. Change it every week if you need to. This is your sacred space, you should treat it as such.

Got any other tips for clearing that clutter? Share them with us in the comments below!
As seen on 8List.
No comments:

10 Cool Offices You'll Wish Were Yours

3) Square
Talk about multitasking: At San Francisco-based mobile payments company Square, robots allow employees to move around the office even while they’re still at their desks.

At AOL’s office in Dulles, Virginia, the brightly-colored furniture also fits into the walls, creating even more floor space.

5) Citrix
At Citrix’s Santa Clara, California office, this “server room” is actually a place for designers to take a quiet break in soothing light.

6) Heineken
At Heineken’s US office it’s not just 5 o’clock somewhere–it’s 5 o’clock here. This full-service, in-office bar allows employees to have a cold one at work.

8) Red Ventures
Nope–that’s not a resort, it’s the office campus at Red Ventures. In addition to the fire bits the space also features bocce ball courts and a putting green.

This giant desk lamp outside the company’s headquarters not only evokes Pixar’s beloved films–it lights up at night!

As seen on Forbes: In pictures: 10 Of The Coolest Office Spaces
No comments:

7 Simple Office Changes That Can Increase Mood and Productivity

Since bad moods and stress can spread through your office like the flu, it's important to make some small changes to boost everyone's morale.

The office is a great place to collaborate, communicate, and work productively--most of the time. If given a bad environment or during a particularly stressful period, the workplace can quickly turn hostile, making employees stressed-out, unproductive, and even resentful of their employer. Bad moods and stress are contagious, so it's especially important to nip these feelings early.

While you can't do much about workloads and the demands of the job, you can make minor changes to your office that lead to significant boosts in mood and productivity for your employees. Try these seven simple changes and watch as your employees become happier and more productive:

As seen on Inc.com
No comments:

Sitting down at work is no worse for you than standing up, study claims

British academics say any stationary position – sitting or standing – is detrimental to your health and cast doubt on the value of sit-stand work stations.

Sitting down is no worse for you than standing up as long as you take regular exercise, a study has claimed, casting doubt on the health benefits of sit-stand work stations.

The research by British academics also challenged advice from the country’s National Health Service (NHS) based on other studies stating that “remaining seated for too long is bad for your health, regardless of how much exercise you do”.

Researchers at Exeter University and University College London followed more than 5,000 people over a 16-year period and their findings were published in the International Journal of Epidemiology.

“Any stationary posture where energy expenditure is low may be detrimental to health, be it sitting or standing,” said Melvyn Hillsdon from Exeter’s sport and health sciences department.

“The results cast doubt on the benefits of sit-stand work stations, which employers are increasingly providing to promote healthy working environments.”

The research found there was no influence on mortality risk for participants from sitting at work, during leisure time or watching television.

The NHS said on its website in advice published last year that there was “increasing evidence” linking excessive sitting with being obese, type-2 diabetes, some types of cancer, and premature death.

“Do some tasks standing, like having coffee and chats, or even writing a letter – Ernest Hemingway wrote his novels standing,” he added.